I was incredibly tired that day.

That day, I failed to pass another interview. The sky was filled with dark clouds as if to represent the murky feelings in my heart.

The traffic light turned green. I walked along the road with heavy steps. Then I heard a distant cry.

My eyes swept the street, and I fixed my gaze upon a boy in a yellow kindergarten uniform. It seemed as if he stumbled and fell in the middle of the road. Several tears stained his chubby cheeks.

It was such a loud horn that I could no longer hear the child crying.

From afar, I saw a large truck rushing towards us without lowering its speed even a bit.

I don’t know if the brakes were broken, but I was shaking like crazy.

Before I realized, my body had already reacted instinctively.

I jumped out towards the child and pushed him away.

Then, everything went black…

I opened my eyes and saw the sky above me.

The dark clouds, which had been thick all day long, have finally disappeared.

I slowly got up as raindrops fell from the sky. It felt strange.

When I woke up and turned my head, I saw my body, all covered in blood.

Next to me, a child in a kindergarten uniform was crying, and people started to gather around the site.

The sound of an ambulance siren was echoing throughout the block.

My sight fell upon my bloodied figure when a strange window appeared before my eyes.

Option 1. Live the rest of your life in either Heaven or Hell.

Option 2. Reincarnate into another world.

* As you have saved a life, you will be given additional choices and buff items.

* Reminder: The world you’ll reincarnate to is random.

‘What, have the angels lost their jobs?’

I was reading the explanation calmly when another window appeared.

The judgment of heaven and hell…… honestly, I wasn’t confident.

I didn’t live a life full of sins, but it’s not like I lived like a saint either. Of course, I did just save a life… but still….

That being said, It would be careless of me to choose option 2 without hesitation.

If a new life is given randomly, then there’s a chance that I could be reincarnated as a criminal or a monster, right?

In my heart, I prayed to have a blissful life.

A week has passed since I got reincarnated into a new life, and I am not happy at all.

The person I got reincarnated to was destined for a disastrous future. Her life won’t be filled with happiness but full of torments.

The daughter of Count McClair, she was destined to die decades later.

Even if I was given a second chance in life….

Elody McClair is a villain from a novel.

Of course, I didn’t realize that I was in a novel upon my arrival in this world.

At first, I thought it was just an ordinary magical fantasy world.

It’s all thanks to my husband, Caville Cernoir. I realized that this place’s pure fiction.

Caville is an artificial male lead in a romance novel.

He is handsome, well-built, good-natured, and talented.

Sadly, however, the heroine was not Elody.

The heroine was a princess of the Empire of Dayev, which collapsed a few years later after the war broke out.

There was a reason why I felt a little affection for Caville’s character in the novel.

It’s just that his fate was similar to mine.

Caville was abandoned in an orphanage as a newborn baby by the Duke of Cernoir. Even in orphanages, children are severely harassed by adults.

After both his parents, the duke, and the duchess died, he inherited the title as he was the sole successor to the dukedom.

Upon becoming a duke, he married a wife, who abused him for six years.

The abusive wife was Elody McClair.

Elody reigned as the duke’s wife and replaced all the servants to those who served under her. She ordered them to show indifference to Caville’s presence.

‘It’s a novel without cider….’

The story was so frustrating that I could die from anger just by reading it.

A few years later, Caville was assigned to lead the knights into the battlefield.

He conveyed his leadership abilities and earned trust from the knights. The war had turned Caville from a little boy into a respectable young man.

Then, he met the love of his life.

That was the female lead.

Unfortunately, it couldn’t be helped.

Anyways, Caville, who made a great contribution during the war, returned as a hero with the heroine.

Elody, Caville’s wife, changed her attitude when her neglected husband came back from war.

She told him about how much she had missed him when he was gone. How she’s been waiting for his return for a long time.

Unbeknownst to her, Caville asked for a divorce, and she became furious.

Elody rejected his demands. She persecuted and tormented the princess, who had come to stay in the mansion. In the end, she did an irreparable deed….

‘A poison that could harden the whole body like a stone….’

It was the use of poison.

Elody’s a genius in magic. Therefore, she was able to develop a terrible poison to kill the princess.

Fortunately, Caville discovered her plan and banished the duchess from the house of Cernoir.

The villain faced a typical end.

After being ripped off from her title, Elody suffered from an incurable disease that had all the symptoms as the poison she made.

She died a lonely death within the slums.

Elody smiled bitterly and looked at her sleeping husband.

Right now, Caville was only seven years old. However, all the years of abuse led his malnourished body to become smaller and thinner than the average boy at his age.

I felt sorry for him. A child’s stomach and cheeks should be plump when they’re sleeping…

I’ve made a decision.

I was given a new life. I will not waste this chance and repeat Elody’s previous mistake. I will lead a life full of happiness.

When I came to this world, there was no restriction that I could not change the course of fate…

I had no intention of abusing Caville like the original one.

How can you abuse someone when they are so lovely?

I thought I’d live a long and happy life.

To do that, I had to raise the Caville well and develop a cure for the incurable disease that I’m going to get later.

The goal was clear.

I shook Caville lightly. His small body was covered under the blanket.

At this point, Caville was only 7, while Elody was 13.

“I’ll read you a book about fairy tales after you eat.”

His eyes glistened as he heard the word fairy tale.

Caville’s knowledge was lacking because he had been neglected for a long time.

So he was still inadequate at reading and writing. In the original story, he was illiterate until he went to war.

But I was already planning to teach Caville before that. ‘Let’s not be discouraged!’

I wanted him to be acknowledged by the world.

The Cernoir family had a lineage of dukes with extraordinary powers.

The first Duke of Cernoir was a war hero who conquered the vast land himself.

However, because of the former duke’s poor management of the estate, The House of Cernoir is currently suffering from financial difficulties.

Elody’s family was not very wealthy either.

The character of Count McClair, who married his daughter to the heir of a poor Duke’s family, was also well known.

In the dim memory of little Elody who came back to life, Count McClair was full of greed. Unable to sell his children, he turned to the Duke’s butler, who offered him a large sum of money. Then Norman, the duke’s loyal butler, made a substantial dowry for Caville.

That’s because Caville, who came from an orphanage, couldn’t adapt at all and was still afraid of an adult.

The butler thought it would have been better to have a wife who is a little more mature than Caville. A wife who can protect and care for him.

Little did he know, his choice would end up creating a massive ordeal for the child. To the point where the money he scraped up became a waste,

Of course, the butler could not have known that his wife would abuse him.

At first, no one knew that Elody was abusing Caville.

In the original story, Elody fired the butler and took over the House of Cernoir as her power and status grew bigger after her marriage.

All the faithful servants were replaced.

She was clever and committed numerous misdeeds with her power.

In fact, she even showed a vast knowledge in the field of medicine.

Elody muttered at the sight of Caville rubbing his eyes.

“You don’t have to know yet. Now, let’s wash your face first.”

“I told you you’d be ugly if you were dirty.”

Caville pouted his lips and nodded his head.

A week ago, he was as vigilant as a cat. Fortunately, he has slowly opened his heart to me.

It was the same for me. I couldn’t help getting attached to him after sleeping in the same bed every day.

It was a pity that Caville had never experienced human affection before.

The maid brought a basin filled with warm water. After setting down the basin, she rolled up her sleeves.

At the maid’s words, Caville hid behind Elody’s back with wary eyes.

The maid glanced at Elody and looked as if her heart was melting.

The maid, named Marie, was a young woman, but like the butler, she was a faithful servant of the duke.

‘I finally have a proper master.’

Marie was filled with hope.

‘How can she be so mature?’

She was opposed to the idea at first. She couldn’t believe that a child who had just been adopted from the orphanage would have to get married immediately….

But contrary to her worries, the butler’s decision was right.

After getting married to his wife, the young lord had quickly adapted to the role of a Duke.

When the maid went out, Caville no longer kept his guard up.

Perhaps because of the maltreatment at the orphanage, he was still afraid of adults.

Elody put a towel around Caville’s neck and washed his face thoroughly with warm water.

“Haha! Stop moving, will you?”

She was happy even though she was playing with a little boy.

Somehow, it felt like she had a younger brother.

‘Yes, I’ll raise him well and hand him over to the princess!’ 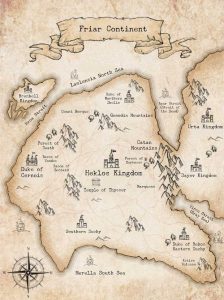 For any errors and issues contact me through discord:- https://discord.gg/Q3dStgu