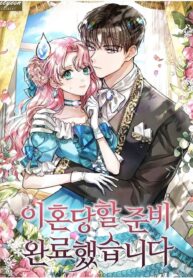 When my husband went to war, I started preparing for a divorce. Because if the original story is true, the male lead will fall in love with the princess of the ruined country and bring her back!

That’s why instead of following the road that leads to defeat, I intended to get a decent divorce.

While preparing for that, I took some money and earned quite a fortune. I’ve also developed a cure because I didn’t want to die of incurable diseases like the original villainess. All that’s left is getting divorced!

My cute little husband came home and grew up to be such a fine man! But don’t worry, I’m all set to divorce you! Oddly enough, the reaction of my husband is a little strange.

“While I was fighting on the battlefield, you were prepared to run away.”

He smiled dangerously, whilst wrapping my waist with his big hands.

“Are you having an affair?”

Unlike the pretty corners of his mouth, his eyes were burning hot.

The Male Lead is Forced to Work Hard