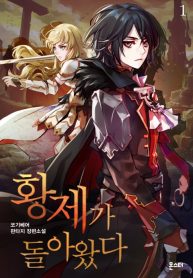 Ahead of his final battle, he is betrayed.

The emperor eyes close as he meets his end…… so he should have.

“Which idiot brought me back alive-eee!!“

After dying and resurrecting, he looks behind the black curtain for the hidden truth and to stop the rift that’s dividing the world, in the name of heresy he begins his fight against the empire.

Now, the emperor has returned!