Hydar’s face visibly turned sour, and he turned away as Ophelia continued to stare at him.

He was a rather hot-tempered man, so it was better if Ophelia wouldn’t press him any further. She didn’t think he’d insist on the invitation anyway.

He was also a man who at least had some tact, so he shouldn’t show just how furious he really was in front of her.

Ophelia went ahead and wrapped up their conversation.

“…I’ll overlook your discourtesy. Be careful next time.”

“Even though you’re an illegitimate child, I guess you still won’t pay any mind to any other man less than the Grand Duke of Ronen.”

And this was the answer he returned her with.

She expected too much from this man again.

It wasn’t difficult to guess how he found out about rumors of her entanglement with Ian.

No matter how fast rumors spread, there’s no way that a rumor originating from the capital could have possibly reached this closed off territory in just a few days.

“You must have done a background check on me.”

Even if she didn’t think hard about it, it was obvious.

Ophelia took a step back. She didn’t want to deal with a possible outburst by a burly man like Hydar in a close distance.

She didn’t think that Hydar would cross the line, but she had made enough oversights in the past. She didn’t need to have the same regrets.

Hydar narrowed the distance between them as he took a step closer, sneering like a beast on the prowl.

“I heard that you seduced your younger sister’s man, dear Imperial Princess. Is it because you’re an illegitimate child that you’re setting the bar high with your taste in men?”

“Who knows. Even if it’s not a nobleman, I’m certain that I don’t want to deal with difficult men.”

And after Ophelia said this, she stumbled.

It took her a second to realize that she had been slapped.

She could taste something metallic inside her mouth, and it seemed that blood had burst inside.

So he really was the type of man who would raise his hand once he lost his temper.

“You’re just half a noble, and yet you dare provoke me with that tongue of yours?”

Ah, rather than his head being hollow as she had assumed, it was his arrogance that spurred him to act in this way.

Even so, Ophelia didn’t have anyone by her side right now, and it was impossible for her to physically win over a man twice her size.

After Hydar had been provoked, Ophelia backed away and felt the desk behind her as he approached.

He had already hit her once and Hydar’s eyes were wide open with wrath, snarling in a way that was befitting his size. It was clear that he also thought she had no chance to win over him.

“You have no one to support you, isn’t that right, Princess? You must know—if an accident happens to befall you, do you think anyone would care?”

As he grabbed Ophelia’s shoulder violently, he laughed insidiously.

“The title of ‘inspector’ is just a pretty cover. Who here doesn’t know that your father is just trying to sell you to me? Huh? I was going to let it slide even if you’re just a filthy half-blood, but you don’t even know your place. Do you think we’re on the same level?”

Even after all that, Ophelia was calm.

She had experienced this already so many times. Those who once flattered her, as though she were the most significant person in the world, would eventually become just like Hydar right now.

That’s why even if he tried to provoke her by belittling her like this, it wouldn’t be of any effect to Ophelia at all.

Something like this would have sent her to misery before, but because she had already grown so numb, how could this possibly affect her?

The words ‘know your place’ followed her like a shadow throughout all her life in Ronen.

Hydar shouldn’t have underestimated his opponent.

He should have thought of how much she had already been through so that he could at least get a rise out of her.

She had endured this far without anyone to support her, without any special abilities to help her.

Well, if he had the foresight to use his hollow head, then the situation wouldn’t be like this.

Not knowing one’s place. Her?

“Hydar Ladeen. It seems like it’s you who’s unaware of your place.”

Just as he went ahead and slapped her—

Ophelia lunged forward and hit Hydar on his side using her elbow with all her might.

After this, the hand that had been gripping Ophelia’s shoulder loosened its grip reflexively. She didn’t miss the opportunity to reach for the thing that she’d been eyeing for a while now.

The quill pen with ink that hadn’t dried yet.

She didn’t want to lose this opportunity.

“Watch your back, you piece of trash.”

All the glass of the large windows of one wall shattered at once, and Hydar was flung back.

Because there was a large thing that flew into the room and tackled him with great force.

Up until here, Ophelia still had no intention to lower her guard, but when she realized the identity of who it was that flew in, she smiled wryly at the ridiculous situation.

“I came here right away after hearing from Asello.”

The ‘large thing’ that had flung Hydar towards the opposite wall and shattered those windows stood up straight.

Having flown straight through the windows like that, his body should have been a bloody mess, but he didn’t even have any scratches.

She didn’t expect to see him this soon.

Golden hair and the green, slitted eyes of a bird of prey.

If not for the large cloak over his body, Ophelia would have been looking at the nearly naked man, who she called by name. 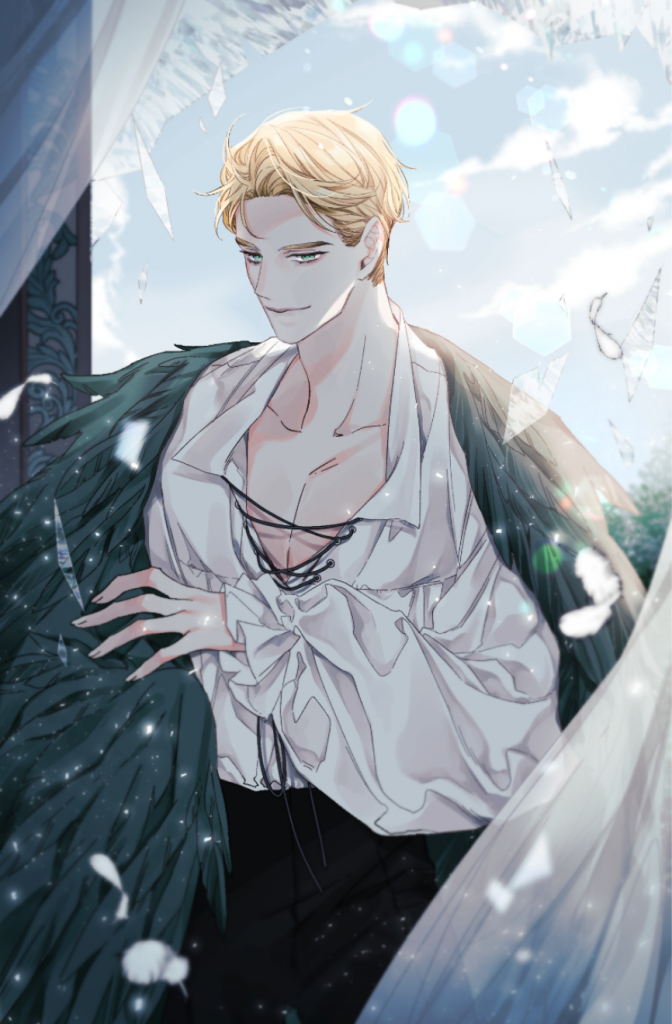 The moment his name was called, Sante noticed that the woman in front of him was the same human being who was allegedly looking for him.

Last night, young siren siblings who had gotten into trouble came to him in a flurry.

—Sante, that woman brightened up the entire ocean! I’ve never seen any other time that the Laffel shone so brightly!

—That’s why we each gave her a feather. Next time, she said she’ll bring us food from the land!

The younger the sirens were, the more mischievous and the more cruel they became.

Considering that most of the recent shipwrecks were the work of these three, it was unusual that they were suddenly so excited about a human female.

They were being so loud that, at first, Sante thought that he should just fling them off into the ocean, but he decided to be patient.

As the head of the sirens, Sante showed mercy and listened to their story until they got tired and eventually settled down. It was certainly a wise decision.

—Right, she said that we should bring you to her, Sante.

After all that fuss, this was the only thing that piqued his curiosity.

—Tell me more about it, Asello. Did that woman really ask to see me?

—Yes. Is she a woman that Sante knows?

—Hair as red as the sky at daybreak. Eyes as blue as the ocean around the equator. She has a slim figure.

And they mentioned that she was fair and was likely a noble. Was there a girl like that among the women he’d met before?

Asello’s description was rather vague, but not to the point that it was incomprehensible.

After trying to scour his memories, Sante concluded that they might have had just an insignificant encounter.

If she was close enough or important enough to him, she would have used his feather, but seeing as she used young sirens to call him instead of seeking him out herself, their relationship in the past might have been fleeting.

It was quite frequent that those who get captivated by sirens wouldn’t be able to forget them easily, so Sante assumed this was the case.

—I don’t think she’s that important. It can’t be helped that you already gave your feathers, but I don’t see the need to go there myself. It’s nothing.

—But Sante, the woman told me to bring you to her.

—So just because she said so, you’ll just follow her?

—No, it’s because she called you by the name ‘Sante’.

Only then did Sante realize what Asello was saying. Usually when he was being called, they would just ask for the head of the sirens, or the leader.

Sante lightly brushed back his hair back, but his fringe flowed back down over his forehead as he let go.

And, right now, Sante’s narrowed eyes were focused on the red-haired human female in front of him.

The silence that stretched between them wasn’t prolonged. After he scanned her from head to toe, a decadently low voice full of fascination flowed between Sante’s red lips.

tl/n: i’m aware that Sante’s description in the novel as being nearly naked doesn’t match the illustration… it’s a shame (lol) but maybe it’s because of kakaopage’s age restriction?