“I made it up,” the Flame Emperor said. “Don’t you recognize a bluff?” He chuckled. “I don’t have any Lie Detection skills. It was a bluff to trick the Saintess. Wow, the two of you are really naive. Did you really believe me?”

“T-then…” My lips quivered. I was shocked. “Did you kill the Saintess without any concrete proof?”

A Rank 9 Hunter, the Saintess. Unlike the psychopath in front of me, she was an upright Hunter who donated most of her hard-earned money to orphanages. That’s how she earned her title as the Saintess. But you’re telling me that this man killed her based on a suspicion?

“Hey,” the Flame Emperor said. “Those were some harsh words. How can you judge a person like that? Of course, I checked. The Saintess really tried to kill me. If I didn’t kill her first, she would have poisoned me to death by tomorrow.”

The Flame Emperor spat on the floor. “Fucking plague! Just remembering it ruins my mood.”

I gaped at him.

“But you don’t need to know about that,” he said.

I was at a loss for words. It wasn’t only because… the Flame Emperor was absurdly self-confident. There was a certain conviction reflected in his eyes. Confidence that there was a good reason to kill the Saintess. At the very least, that’s how it appeared to me.

“Well, you must be truly innocent since you heard me talk about the Lie Detection skill.” The Flame Emperor’s voice dripped with sarcasm.

“To be fair, it is my first time seeing your face. I memorized the faces of all the rats hiding in this area. All 18 of them. I even counted their heads to make sure I didn’t miss a single fucker… Hmm. Anyway, you’re right. I don’t recognize seeing your innocent face amongst them.”

The Flame Emperor touched my head. Pat. He was smiling. Did he finally believe in my innocence?

“But you know who I am,” he said. “You even saw me kill the Saintess.”

“That’s why you have to die for me.” His fingers on my head stretched outward, extended into flames, and clasped my skull. Burning.

Heat seared my head. The inside became hot. Burning. Boiling. My skull churned like an oil container.

I couldn’t speak. I couldn’t scream. Under the intense pain, all circuits were cut off—impossible to make any noise at all.

It was a name given to me by the caregiver of the orphanage. He wanted me to become a great person like Confucius. But I lived a life nothing like Confucius and died pitifully like an emaciated street dog.

Sorrow filled me. Overflowed from me and burned into the ground with the rest of me. If you compared this to a game, it would be a bad end. In plain words, a ruined life. A life where you die broken.

With only sorrow remaining.

| Skill conditions were met as a result of death.

But, I also made three mistakes: Died by mistake. Lived making mistakes. Born by mistake. Was everything a mistake since birth?

The golden fireflies flew quickly. They were so fast, it was near impossible to catch them. There were many brown fireflies. They appeared easy to catch. There were also many silver fireflies. As expected, it was also possible to catch them. Then there was the sun. The only golden firefly that flickered so fast I could barely follow it with my eyes. It shone as brightly as the sun, difficult to focus on. That one.

I reached out for the one and only golden sunfire.

And I caught it.

And then I died. 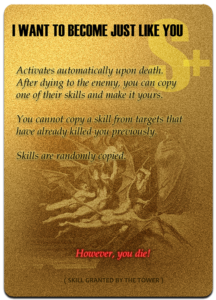 I’ll tell you firsthand. First, there was no hellfire. In fact, I couldn’t find any fire. There was a gas stove, but it lacked the firepower to start a hellfire. Ah. Contrary to my expectations, Hell had a small fridge. It also had a small bed… and even an old TV.

In other words, it looked exactly like my rented room. Rather, it was my rented room.
No matter how I looked at it, this was not Hell. It was my lovely 125 square-foot room that I rented for a cheap price.

It was perfectly fine. Just to make sure, I looked at my smartphone screen’s reflection. I saw a face that looked like an unfinished Apollo statue. It wasn’t handsome, but it wasn’t bad either.

I couldn’t find any burn marks.

“…Huh? What is going on?” Really, what was going on? ‘Did the Flame Emperor treat me and carry me back home?’

However… it was the only explanation I could think of at that very moment. Perhaps he was kinder than I thought. He was crazy, but maybe he wasn’t a psychopathic murderer. He could have pretended to kill me and instead saved me at the last moment.

Then did he leave the TV on before he left?

The Black Dragon Guild attempts to conquer the 40th floor of the Tower. Didn’t they confidently declare that they were going to finally show the might of the greatest guild?

Unfortunately, they have returned empty handed.

No, that wasn’t the case. The Flame Emperor wasn’t present in this 125 square-foot room. He didn’t leave the TV on before he left either.

The Rank 1 Hunter! The Flame Emperor has single-handedly subjugated a Boss once again!

Instead, he was on the TV screen with furrowed brows. I found myself blankly staring at the TV.

At the top right corner of the broadcast, there were large bold letters that read: LIVE.
I continued to gape at the TV.

First of all, I would like you to change that shitty title.

I’m talking about the Flame Emperor. Call me by my name instead of using that shitty title.

Yoo Sooha—The World’s Rank 1 Hunter. The protagonist of this era. The hero I envied was right there. That’s right. Perhaps, it was inappropriate to say he was there, since he just killed me, and I died to him a moment ago.

“No way.” Even as I said, “No way,” my hands had already grabbed my smartphone. I checked the date. It was yesterday. My hands shook. I checked the Internet communities:

Hey, the Flame Emperor is screwing around again!
2 minutes ago  | Report

Can’t he hold his tongue when the entire world is watching him?
1 minute ago  | Report

The Flame Emperor got a girlfriend! Apparently, it is the Saintess!
1 minute ago  | Report

This site, too. That community, too. All over social media.

Everything was the same.

All the texts I’d seen yesterday were being posted in real time. I’d certainly seen these exact posts yesterday, but people were responding to it as if it were their first time seeing the TV interview.

Despite that, there was something different.

I could not find the comments I’d written.

It was obvious. Normally, I would be passionately leaving comments by now. But my soul left my body a long time ago.

Flash!
A golden card emerged in front of me like flames.

I’d already memorized this skill after reading it multiple times since yesterday. Despite being S-Rank, it was a skill that was unusable. The price of using it was my death. It was a rare garbage skill. But, that wasn’t all of it.

There were two burning flames in front of me.

Two golden cards floated before me.

‘How?’ My heart pounded against my chest, loud in my ears.
Returner’s Clockwork Watch. This was a new skill I’d never seen before. It wasn’t there when I checked it yesterday, and it wasn’t there right before I died to the Flame Emperor. I only had a garbage skill that was totally unusable; I never had any other skill with that name… I definitely did not have another golden skill. I would have absolutely noticed something crazy like that.

‘How?’ So, of course, I couldn’t understand.

I knew it. This card was mine.

I also knew: it could be the skill card that changed my life.

I reached for the card and grabbed it. 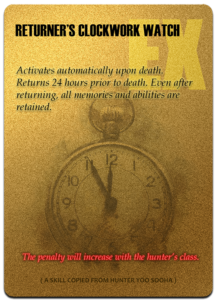 Upon death, you return to 24 hours prior.

As if my head got struck by lightning, I trembled. My heart pounded so hard that it might as well have been a sledge hammer.

I finally fucking realized it.

“This was the Flame Emperor’s secret move…” I muttered at my news-filled walls.

How did the Flame Emperor become the World’s Rank 1 Hunter?

How did he defeat the impregnable 10th-floor boss all by himself?

And lastly, why was he so certain that the Saintess tried to kill him?

I finally understood everything.

“The Saintess really tried to kill me.”
“If I didn’t kill her first, she would have poisoned me to death by tomorrow.”

These were his words.

He’d died to the Saintess once.

Just like he said, he was poisoned to death. That’s why he returned to 24 hours prior, gritting his teeth to pay back what he suffered. For revenge.

‘And because of that, even I died.’ I clenched my fists. ‘He killed an innocent person like me! Just because I was in his way!’

He severed my legs. He burned my head. And he killed me. He played with me like an insect.

Before you leave, please tell our viewers one last thing!

The Flame Emperor glowered directly into the camera.

But, don’t get in my way even if you succeed.

I clenched my golden card. It was the same card that man possessed, and it was a skill I copied from him. The Flame Emperor was Rank 1, and I was the weakest Hunter that didn’t even have a rank. But right now, I was at the same starting line as him.

Or I’ll kill you.

This time, it was going to be my revenge.