“I told Sante to let the people at the tower know that you’ve recovered your memories.”

“Is it? But it’s true that you’ve recovered your memories. You know your real name and your original position.”

Ophelia herself knew it was a lie, though she responded calmly.

But in this situation, lies were necessary.

“I don’t know how much they would believe, but there are at least one or two people who’d believe even half of it. There might be people who’d want to confirm it.”

“So you’re trying to trick them into finding me directly?”

“That’s right. Then, you’ll recover your memories through them, and I’ll be able to know the location of the magic tower.”

Only then did Alei realize why Ophelia gave him Sante’s feather.

There was no one more helpful in spreading the news about the magic tower’s lord other than the head of the sirens himself.

Perhaps sensing Alei’s thoughts, Ophelia reached for the quill that she handed over to him a while ago.

“If you’re in a pinch, call Sante. You can call me as well, but Sante will be faster.”

“We’ll definitely get caught. This is such a crude lie.”

As she called his name, he raised his head. Ophelia had been a couple steps away earlier, but now she was closer to him.

To the point where only one small movement would let his body brush against hers.

“I know you’re not good at lying. It doesn’t matter if you get caught, so you don’t have to feel so pressured.”

Ophelia’s hand wrapped over Alei’s hand that was holding the quill.

That cool warmth that touched his hand was the only thing he felt, but why did it feel like he couldn’t move? 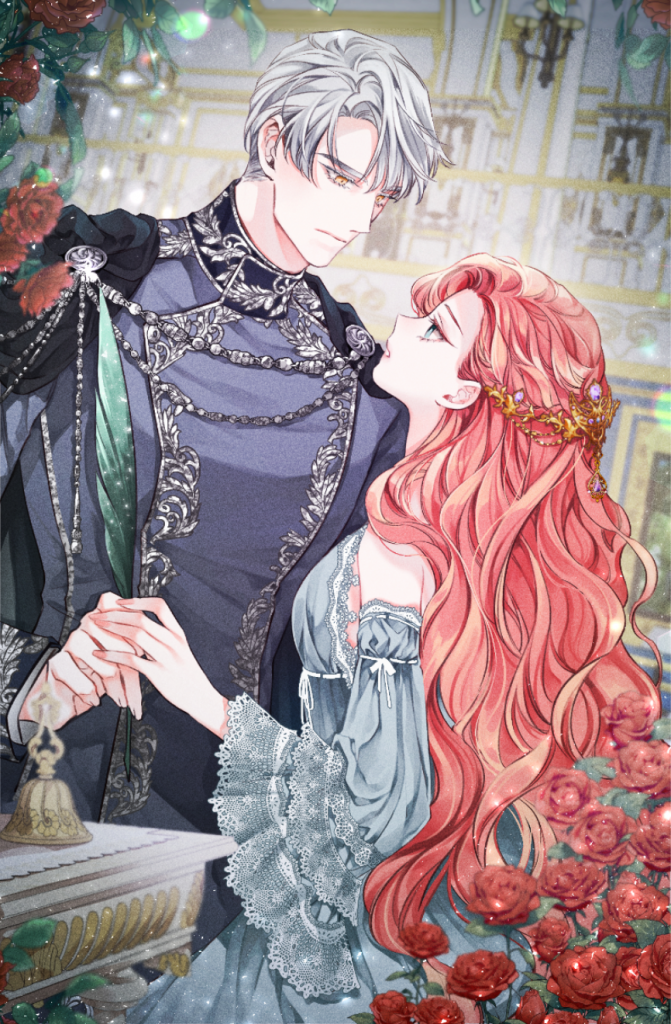 Not confident enough to meet her eyes, Alei dropped his gaze.

“This is not a matter of lying. It’s about deceiving them.”

“I don’t understand why that’s a problem.”

Despite his worries, the voice that answered back remained the same.

“Alei, if I can’t go to the magic tower, I will have to choose between the worst or the lesser evil.”

The worst and the lesser evil. Ophelia deliberately chose ominous words that were difficult to listen to.

Alei would never ask what these meant.

Because, while he was at that garden, he already saw Ophelia throwing herself down a balcony once.

The golden irises that avoided her were visibly conflicted. Her face, which he considered beautiful, now looked very pained.

Of course. She didn’t want to do this either.

However, Ophelia had no other choice.

The reason for their disagreement was clear. He was not desperate, but she was.

Ophelia knew very well that this was their difference.

So she pushed him further.

“Does your morality take precedence over my survival?”

Eventually, Alei relented and waved a white flag. It was thanks to him wanting to find a way out.

“But aren’t you acting on the assumption that they’ll come?”

“How can you be so sure that they’ll really find me?”

People from the magic tower might never come. Seeing his obvious thoughts so clearly on his face, Ophelia smiled without realizing it.

Because her errand boy wants to see something more interesting.

She’s sure that he wouldn’t let them go without making sure that they’d come here.

“So, Alejandro seems to have regained his memories.”

With his hand on the table, Sante concluded this way.

It wasn’t long before those who had been listening intently to him thus far started buzzing.

Right now, Sante was sitting at a roundtable conference room of the magic tower.

There were two conference rooms used by high-ranking officials in the tower, and the difference between the two was their shapes.

One was circular while the other was rectangular.

At the rectangle table, there was a clear leader, and that person sat at the head of the table. On the other hand, the roundtable did not have any such top seat.

Meetings with the magic tower’s lord were usually held at the rectangle table. Otherwise, the roundtable was always used.

Sante observed his audience that went abuzz at the news.

“That’s not possible. There was no such talk within the tower.”

“Why? Everyone was thinking that it’s taking him too long to return, especially since it’s him.”

“That’s true, but they say it’s supposed to be five years at the earliest.”

“I wish the tower would say something at times like this…”

Their opinions were divided.

Some accepted the declaration, but others shook their heads while saying they couldn’t trust this information.

However, most of them half believed it.

It was also due to the reputation that Sante had, and the inherent magic abilities of Alei that they knew about.

But the biggest reason they thought this way was because Sante had baited them into believing it.

“Sante, did you really meet him?”

“Yeah. Dian called some of the young sirens and asked for me. That’s why I even gave him a feather.”

“Then why isn’t he coming directly to the tower?”

“Even I don’t know, but I have a few guesses. I’ve said what I needed to say, so stop asking.”

When Sante said it straightforwardly like that, the mages were once again thrown into a state of confusion.

If he had regained his memories, he would have naturally come back to the magic tower. They couldn’t understand the need to convey the news so cumbersomely through Sante like this.

And this was exactly what Ophelia intended.

‘That human has good insight.’

Sante studied the confused faces in the conference room as he recalled the conversation he had with her back then.

Alei might not know, but Sante also asked the same question.

Just the idea of deceiving the entire tower was ridiculous.

—Alright, everything looks good. But what if no one comes even after I say this?

—That’s why you have to say it obscurely. Let them think that something’s odd.

—I don’t have much of a glib tongue. What if they don’t fall for it?

Of course, that was an obvious lie. His glib tongue was well oiled. Ophelia knew this and stared at him with cold eyes.

—Then sing a song so that they’d be captivated.

It was an Ophelia-like answer.

Well, in the end, there was no necessity for Sante to sing.

If he did sing, he would have had to be careful because not only would the people in this conference room be bewitched, but the entire floor.

Anyway, it was a known fact that Sante could be a superb enticer even without the need to sing.

Tak, tak. Sante clapped twice to grab the attention of his audience.

“Now, now. What are you all chattering about? I’ve been away for a long time now, so I need to go back soon. Let’s wrap this up quickly.”

A mage with gray hair frowned at Sante’s words.

“If you’re in a hurry, you can go back first. We’ll take care of this matter ourselves.”

“No, shouldn’t I tell Dian about this, too? He’ll be sad if you leave him out on such important issues.”

Isn’t that right? Then, one corner of Sante’s lips curved up.

The mages looked like they wanted to refute everything.

But then nobody spoke up.

Because everyone knew how tenacious Sante was.

Without their liege, there was no one in the tower who could easily argue with Sante.

If it came to a tipping point, no one would be able to control the situation.

Sante was well aware of this, so he smiled broadly as they stayed quiet as though they were dead.

“Good, there seems to be no objection. It seems like everyone’s confused, but I’ll help you out. Raise your hand if you disagree with me.”

The mages sitting round the table were those who knew how to cherish their necks.

“Okay. It’s nice to see everyone being so cooperative. Then, I have a suggestion. Why don’t you stop agonizing over it and just go confirm whether what I said is true or not?”

“I’ve wanted to say that since a while ago!”

The color of wheat flashed up at the other side of the round table.

To be exact, it was a young man with wheat colored hair.

With sparkling eyes, the young man spoke. No, he shouted.

“The lord of the magic tower is coming back soon. Shouldn’t we go and see what’s going on?”

“…How passionate, that male over there. Name?”

“Cornelli. I think I’ve heard of that name somewhere.”

Whenever he felt that something was ominous or foreboding, he knew well through experience that he shouldn’t ignore it.

Don’t forget to rate and leave a review for this series on novel updates!

The Sword and The Dress