The boy was wary of everything.

He was wary of even his parents.

He was a slave of instinct and desire to his father.

He regarded the boy as one of the many children who inherited his blood, but had no affection.

The boy knew that if he showed his abilities, he was a human being who would be offended and killed. Having a woman for his father is just a show-off, and there is no love or human emotion in it.

His mother, the 7th concubine, showed goodness, but that was rather an excuse to be attacked. The concubines were anxious to kill his mother. She’s a good mother anyway, so she won’t fight back.

Having seen all that, the boy was wary of humans.

And. Being a perfect genius, the boy felt no emotion for others.

From a very young age, the boy had a mixture of extreme evil and extreme good. Both sides from the boy.

At the sight of the boy who looked down at the living beings inorganically, the 7th concubine lowered her body and whispered.

“Because you can choose.”

The game that the boy often played when he was young was a game of determining the order of the countries to be conquered. It was like a game to decide the order of death of 49 members of the royal family, including the boy.

Even though it was backed up by extremely meticulous calculations and power for a game.

For the boy, it was just a silly brain game that would end with just a quick glance at it for a few seconds.

Fear was clearly read in the eyes of the 7th concubine who looked a little strange at the boy.

Is it true that she looked down on her child for a moment?

This child is not ordinary. How is she supposed to treat this child?

The 7th concubine was a very wise person by the standards of ordinary people, and she loved the boy. However, the thought in that pretty head was read intact by the boy.

Humans are easy. But it’s dangerous.

He was wary of everyone, and in fact, no one, including the 7th concubine. He didn’t believe them.

So, the moment Charlize wearing a woman’s ceremonial coronet first appeared. He felt like everything was going to be messed up.

Ash-blonde, said to be a mixture of the Grand Duke’s silver hair and the Grand Duchess’s blond hair.

Navy eyes with dreamy eyes like a fairy. The eyes, which were said to become darker toward the rim, were very pretty in person.

The Emperor’s possessive desire was unfamiliar to the boy.

The boy was embarrassed by himself who felt possessive of others, just like his father was.

Why does he want it?

An astonishingly violent raging desire. It was so creepy, so strong that he couldn’t pretend he didn’t know. From the first meeting. If he could describe the feeling of being attracted like a shackle as ‘falling in love’, yes.

The boy fell in love with Charlize at first sight.

He thinks Charlize is only great at swords, but.

Charlize’s words were decades ahead. Sometimes it was hundreds of years ahead.

It is not enough to get an insight into the whole situation just by listening to a few brief pieces of information. She would come up with a solution that no one at the time could find with a casual look.

Charlize knew everything, and there was nothing she couldn’t do.

It should be said that she is perfect beyond the level of excellence. Only walking on the top.

She was a freaking genius.

Nevertheless, Charlize, the person directly involved, took it for granted too carelessly.

As Charlize passed by one day, the assassins were killed by a sword that she swung casually behind her back.

A fifteen-year-old young noble lady. The dress that was too flashy to wield the sword was pink.

Even the boy who witnessed it was hard to believe, and her sword was so fast.

The swing of the sword was no longer even visible to the naked eye.

Charlize passed by the fallen assassins with her unique dreamy face.

Such a ridiculous performance was not only once or twice.

Whatever else, the boy always felt greedy for Charlize.

It was an unbearable and restrained desire.

The urge to be rational was always unbearable enough to be called a miracle.

With the deep thirst for running on the back, he always felt like falling into a swamp. He can’t get out of it. At some point, he didn’t even want to do that.

Deeper and wider than the universe. It was as if he had succumbed to fate and coveted Charlize, like the pressure of nature.

It was precisely because of a passage in a book he read in the library that he started to feel sexual feelings for Charlize.

He had read all the books in the Imperial Library and had nothing to read, so he saw a forbidden book titled ‘A History of the Nighttime’.

「In the past, in the imperial family, a maid or a nanny held nighttime for the imperial family’s sex education. This applies not only to maids and nanny but to all women of the opposite sex who have been by the prince’s side since childhood.」

At the end of the detailed record, only Charlize came to mind.

The boy closed the book and went straight to see Charlize.

Even though he only saw the hand that touched her for a moment, his whole heart was stained with evil.

‘I want to cut that hand off.’

When Charlize, who felt his presence, saw Dylan, the boy smiled brightly at that moment.

Perhaps that day, it was already an irreversible turning point.

The desire grew stronger and stronger, deeper than it could be helped.

He wants it, he wants it, and in the end, it feels like possessiveness is dyed with the essence of existence.

It was natural. He knew it was a dream, but he begged for it to be a reality.

He embraced Charlize by pouring out all his possessive desires that could not be revealed in reality. Roughly again and again.

If he couldn’t have her, he’d rather kill and stuff her. He couldn’t completely swallow it, so he wanted to leave her smell all over his body and make it reek all over the place.

He wanted to cover it with Charlize and erase himself.

So that anyone who finds it can know that it is his woman.

So that no one couldn’t dare to look at her. Even a very slight part of Charlize, he won’t allow anyone to share it.

Around the time when this intense feeling could not be suppressed, Charlize looked at the boy during a swordsmanship class and said.

To the boy who had not yet worn the crown, Charlize called him His Majesty without hesitation.

Charlize, whose eyes are bright, is so beautiful.

He was already a boy who lost his rationality and barely endured his possessive desire.

Taming. It was taming.

He knew it, but he was willing to be tamed.

The hazy blue eyes were more suited to this side from the beginning.

Rather than just friendly and sweet eyes. It was cold and callous. These cold burning eyes.

“Find her. Find Charlize, even if you have to die.”

To Shadow, who is as silent as a mouse, the emperor’s dignified voice fell.

“Bring her in front of me.”

“Yes, I will accept the order.”

The coercive command and domination suited the emperor perfectly.

Three years on the throne.

The emperor’s eyes were crazy with madness.

Shadow bowed his head without daring to make eye contact with the emperor. With a dreadful oath that he would sacrifice his life to carry out his mission.

The boy grew up, and he was already a tyrant. 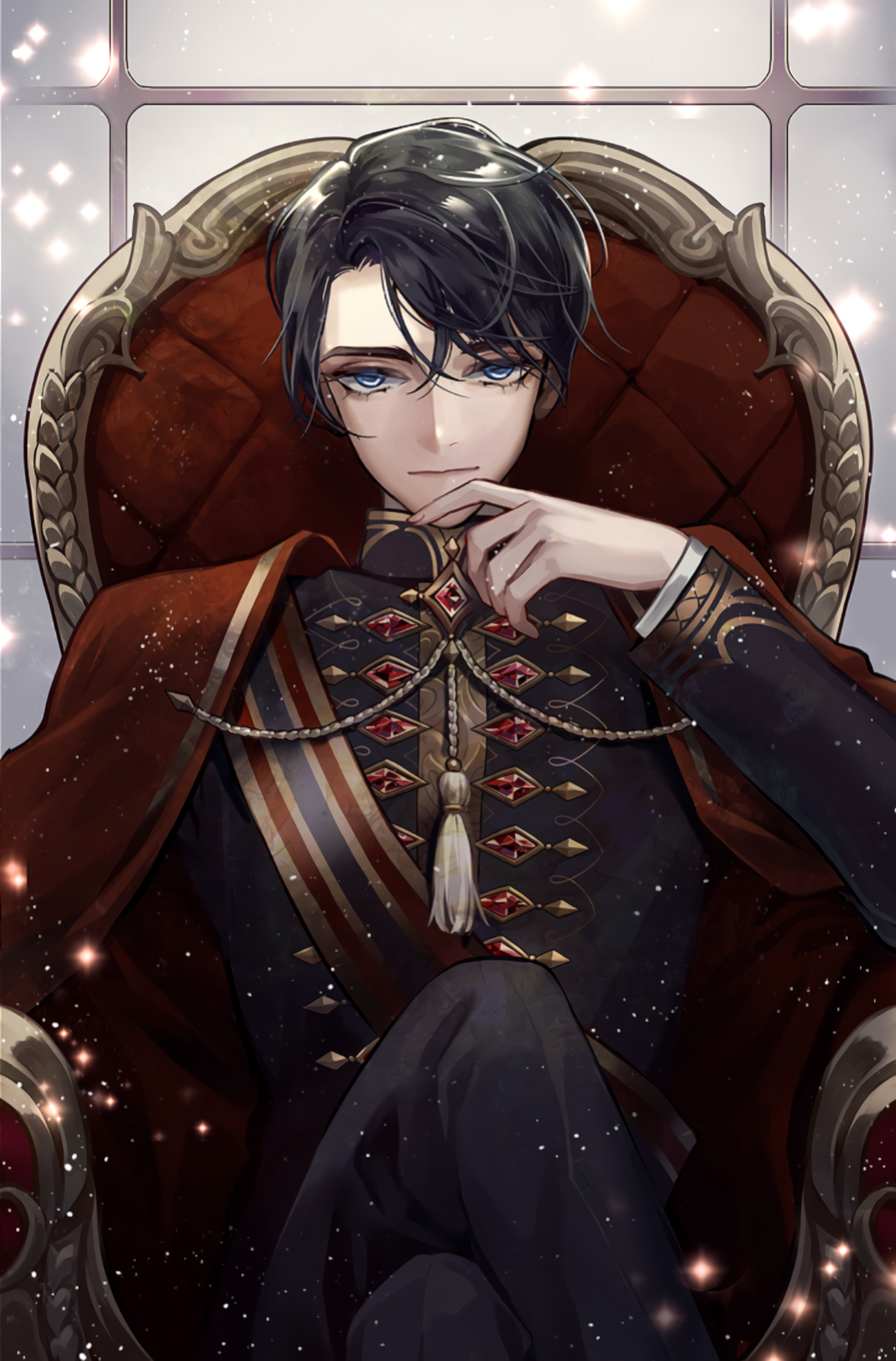 A month after leaving the empire.

Charlize was finally surrounded by the Alperiers.

Payne brought her, but life in Alperier creaked.

Because Charlize didn’t obey their orders at all.

‘Now it seems their patience has reached its limit.’

Even now, Charlize did not obey Alperier’s orders.

Charlize moved according to her intuition without collaboration, and contrary to Alperier’s idea that she would be a big trouble, she completed the mission perfectly and neatly.

Alperier told her to raid without revealing her identity, but why?

They were weak people who didn’t even have to raid.

Around Charlize, the interested party of the magic tower, who had already collapsed without any sword stabs, were scattered.

Alperier’s expression was not good, thinking that the operation had collapsed.

“I have something to say.”

She doesn’t know if she will listen, but was the expression read or the other person’s face was worth seeing.

Of course, Charlize was also surprised when she first came to Alperier.

Alperier was a secret organization with a far greater and deeper history than is known.

All of them deserve to be called the transcendents of the world.

It was a group of strong people beyond imagination with cold eyes.

But it was futile and inefficient.

Although they worked hard, they often gave orders that she couldn’t understand why they had to walk this path.

Even strange customs were forced.

Rather than engraving Alperier’s red lion pattern on the wrist, or designating a personal pattern and putting it behind the ear.

However, Alperier found it even more difficult to handle Charlize’s attitude.

They got angry, saying she wouldn’t mix it.

“Since Payne said you were great, we tried not to touch it as much as we could. But Charlize, if you keep doing this, you’re bound to cause friction. Don’t you know?”

Derian, who likes to pretend to be a leader, took the lead and said.

The white snake pattern behind his ear stood out under the colorful earrings.

Although there is no system of leaders and members in Alperier. Derian was often called the boss. They know he likes to lead, but it was annoying.

Zenius and Vipalio next to Derian stepped up.

“This is a place with a long history.”

The two swordsmen were very tall and muscular, and even ordinary knights were intimidated.

However, Charlize only responded casually with a fresh face.

“I heard that Alperier has better skills than Masters. If you want to pass the test, point that sword at me.”

There was no one who could put Charlize under her, as she knew, on this continent.

No, it wasn’t just a thought, it was also a fact.

Derian, who was making eye contact with Charlize, drew his sword and aimed it with a cold face.

Eyes full of enthusiasm to break that arrogance. Dozens of Alperiers sat on the sidelines. Charlize had a relaxed face, to the point where Derian’s cold momentum was in vain.

Charlize, who had been quiet for a while, asked again.

“I swear in the name of Ehyrit.”

The moment he realized that those eyes were cold, Charlize smiled beautifully.

There are so many audiences. There is no way that a leader obsessed with honor will break the oath of God.

It was an opportunity that finally came. A small smile appeared on Charlize’s face.

It was a dreamy and pretty face.

Derian’s face, who thinks he can never lose.

So it’s even more exciting.

Cry, Even Better If You Beg

The Male Lead Knelt Before Me