Dylan looked at Charlize’s expression and took the necklace out of the box. As she was not wearing any other jewelry today, the nape of Charlize’s neck was white.

“I’ll put it on you. Please look back for a moment.”

Charlize listened quietly. She pulled her hair up on her own. Belatedly, the tip of her ear turned red.

Dylan’s fingers ran across Charlize’s skin. Probably because it was the weakest part of the neck, it was overly sensuous.

Even though Dylan gave her a necklace the other day. She was conscious of it once and her breath trembled.

“Thank you, Your Majesty.”

Charlize put her hair down. The maid, who was standing by her side, calmly accepted the empty box.

Dylan naturally took Charlize’s hand. He tightened his fingers tightly as if they were intertwined with heat.

She never thought deeply about living in the same building as Dylan. However, it was strange to enter the Emperor’s Palace by holding hands like that.

After all, they lived together.

“Since we’re done working early, why don’t we take a break and meet again in the evening?”

Dylan has suggested in a low voice. Her earlobe was itchy for nothing.

“Actually, there was an ice garden that I prepared for you. They said that it is the most beautiful thing to see with the lights at night.”

In what spirit did she nod her head?

When she came to her senses, Charlize returned to the lilac room.

It was only later that she realized that she was meeting Dylan again in the evening. But with her heart beating like this…

“Grandmaster, I brought some clothes to change.”

At Charlize’s rare expression, the maid was surprised but immediately withdrew.

Her mind was quite complicated.

When she first saw Dylan. He was a boy reading a book. Inorganic eyes as if they were not interested in the world.

But Charlize felt a deep sense of homogeneity at the moment. It was an indescribable feeling for her. Looking back, it is now clear.

She was terribly glad to see him.

“Nice to meet you, Prince.”

At that time, each other’s hands were entangled in the air. For two years after returning, she did not visit the Grand Duchy and did mana training with Dylan.

That’s why she thought she was glad to see Dylan as soon as she saw him. No. It wasn’t that simple feeling.

‘Maybe from the moment I first met that boy.’

The young prince who kept his eyes on her. A boy who soon lost his 7th concubine and will be alone in the world. He resonated with his soul without speaking in front of the predicted solitude.

It wasn’t that she got used to being influenced by Dylan, it was Charlize herself.

Even at a time when Dylan is perfectly in her hands and she doesn’t have to be nicer anymore. Charlize stayed too close to Dylan. She didn’t keep her distance.

Assuming that Dylan’s contact or gaze was a different man, she became more certain.

‘If it’s another man, I feel uncomfortable.’

Wrapping arms around her waist, holding hands, touching lips with fingers. Facing the gaze looking into the abyss.

Reaching out her bare feet to give her a foot bath, and the back of his hand touched her cheek.

She liked the delicacy of the eyes entangled in silence. Neither his possessiveness nor the desire of the impatient man. She didn’t hate it.

The sexual tension that flows in the air. She knew but didn’t scatter it.

Suddenly, she got the impression that Dylan was waiting for her. If the emperor was such a genius, he would have known her feelings in advance before Charlize noticed it.

But he said that he gave her some time and waited until she found time to looked back on himself.

She was wary of the feeling of love. Kahu’s approach was also rejected for that reason.

Even if she gets revenge. Even if she uses him. Even on the verge of destruction. He said it doesn’t matter to everyone.

Just to see Dylan as a man. She just asked.

She just wants that one person, Dylan, to be seen as a man. She has only been asking.

‘He would be happy to help me.’

‘You’re willing to help me.’

If he loves her that much, she will attract him. Because it was him who asked her to fall into hell together.

She won’t turn away anymore.

The words of the courtship were swirling around in her mind. Various and detailed descriptions of a person in love.

It was the same as Charlize today.

She immerses herself in Dylan, reflects on the moment they spend together, and gives meaning to him.

It was shortly after meeting Kahu that she refused the proposal of the young noble masters.

Kahu asked Charlize not to be with Dylan. Why?

She was once close to marrying Kahu, so at some point, she felt affectionate feelings toward Kahu.

However, when Kahu confessed his feelings, it became a situation where she had to choose between the two. Charlize left Kahu without any regrets. She chose Dylan.

After all, it was Charlize’s feelings.

‘I will still run for revenge.’

“I will call you Master.”

If he were the one who respected her from the beginning.

If he were the first positive person in her life. What does it matter if love is mixed in the meantime? It’s him who wants to take revenge with her.

‘But we still need to check.’

There were many ice statues in the ice garden. As Dylan said, things that might have been plain during the day sparkled brilliantly when they were illuminated.

“What do you think?”

She literally meant it. The admiration flowed out by herself.

The ice garden was a little far from the Imperial Palace. Because they had to go through snow-covered fields in the middle.

Charlize reached out her fingertips to the ice that carved the actual castle in detail. Her fingertips are sore, but she can bear it.

It was perfect to call it a work of art, as if it had devoted its life to detail. It was a statue that realistically depicted the splendid and magnificent structure of the castle.

The lights are popping up.

The lighting that illuminated the transparent ice crystals was breathtakingly beautiful.

“Will everything melt away after winter?”

Dylan responded, as if there was regret in Charlize’s voice.

“I’m going to put conservation magic on it so it doesn’t melt forever.”

“Everything has an end, so it’s beautiful. It’s a pity, but I don’t want that much, Your Majesty.”

“…As far as I’m concerned, I have never learned the end from Master.”

At that moment, the red light made Dylan’s cheeks hot.

Dylan’s eyes, which were filled with obsession, were dangerous. The muscles on the cheeks hardened finely. Dylan is holding back.

All the images that passed before his eyes were colorful. A piece of rose on a pure white bed sheet. If Charlize wasn’t stronger than Dylan.

Except for Charlize, the strongest and most genius human beings in the world. It was undeniably Dylan. He was raised by Charlize, but it was also the essence of Dylan himself.

He has a face that twists the wrist and wants to drink the blood. He had the look of coveting a woman.

Charlize took off her lips as if she had been bewitched.

“What did you think of when you first saw me?”

Is it because of the afterglow of being immersed in reminiscences?

Dylan’s change felt even more stark. Dylan is no longer a boy. He is not the ambiguity that stood on the boundary between a boy and an adult.

He is neither a prince nor a crown prince.

He fed the Emperor a piece of Ehyrit. He was an emperor and tyrant who took power after exterminating the royal family.

It was not revealed to everyone, but he couldn’t help not knowing that it was Charlize’s intention.

Often Charlize felt that Dylan was mimicking human emotions. At this moment, he endured something. He tilted his head, pretending nothing was wrong.

“Do you want an honest answer, or.”

“Do you want a pleasant answer?”

Does it mean that the two answers are different? Charlize frowned softly.

“How about doing it like this? If you give me an answer to my courtship, I’ll give you both answers.”

Dylan smiled briefly, as if he didn’t expect much from Charlize’s silence.

After that, while walking through the ice garden, they chatted occasionally. These were words that only skimmed the surface.

“Thank you, Your Majesty.”

Since they had to return to the same Imperial Palace anyway, Dylan and Charlize walked together.

Footprints began to be carved in the snowy field, which had to be passed through. Charlize looked down at the hands that were holding Dylan’s. And she raised her head again. The boundary between the night sky and Dylan’s black hair was vague.

The employees stood far away, fearing that they would dare to interfere.

Suddenly Charlize stopped walking. It was because the shoelaces of the new shoes were untied.

The moment he discovered this, Dylan immediately knelt facing Charlize.

The emperor’s knee is precious. He was a heavenly ruler who should not dare to be bent by anyone and is known to have been chosen by heaven.

But Dylan bent down to tie the knot in Charlize’s shoelace.

Dylan’s white skin is clearly contrasted, perhaps due to his black hair. The voice of impulsive desire became stronger at the moment.

Is there a reason not to check?

Charlize reached out her hand. And she lifted Dylan’s chin silently.

Dylan’s expression was strange. He didn’t understand the situation a little bit and looked blank.

Charlize called Dylan’s name, and soon after, she bent down. She went down to Dylan’s eye level.

She didn’t close her eyes. Because she wanted to see his face. She just kissed the defenseless emperor on the lips.

It was just touching.

But. That alone. The whole world was running. It was terribly soft, and she was blinded by the alluring scent that emanated from him. It was ticklish.

Charlize took it off again.

As if taking a stamp, Charlize pressed her lips against Dylan’s again.

As if the incomplete pieces with cracks were perfectly interlocked. It was so warm. It was pounding. It was exciting. It felt like only Dylan and Charlize were the only colors in the black and white world. 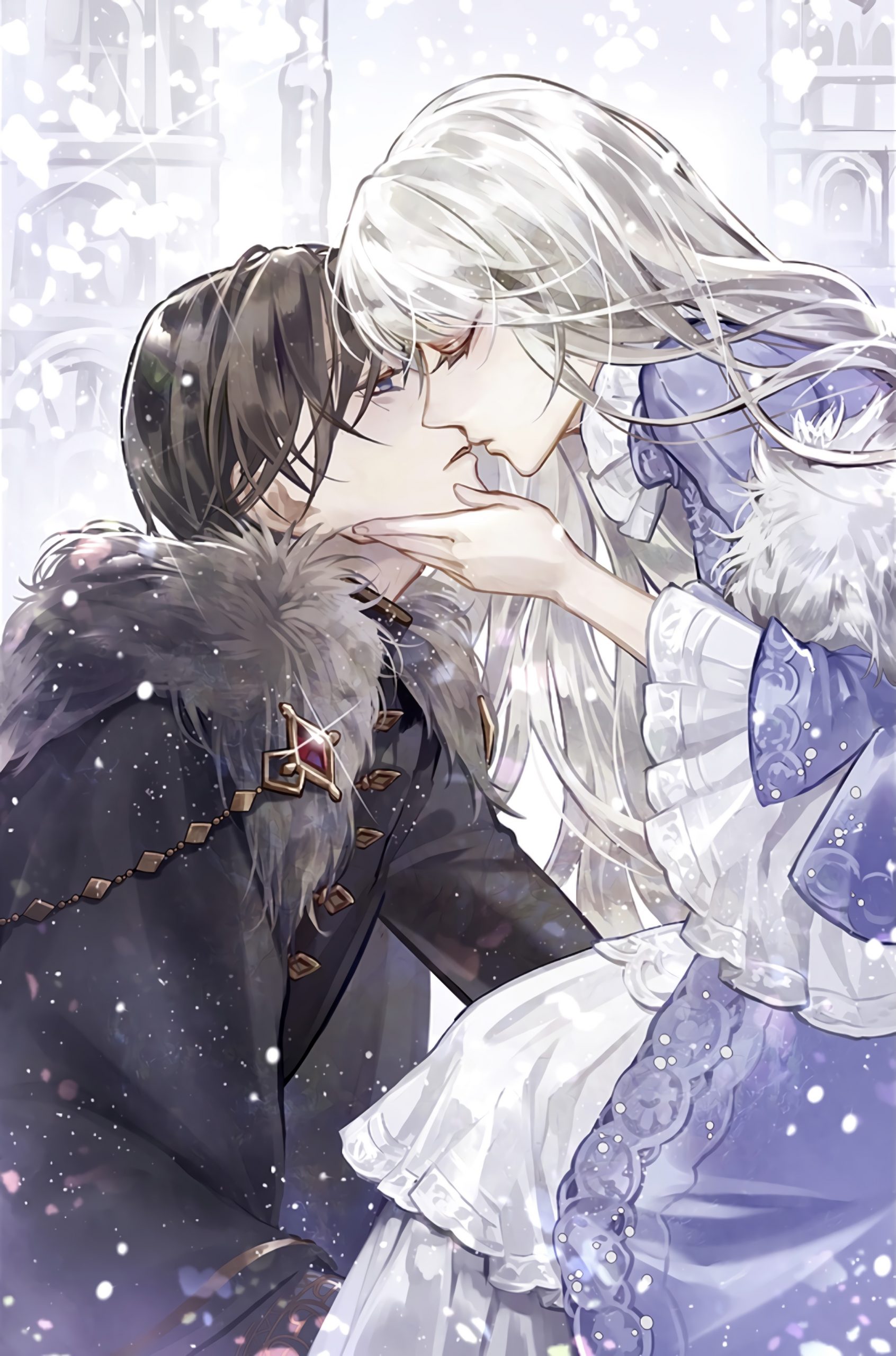 It was their first kiss.

It was only then that Charlize truly realized.

The next moment, Dylan’s palms wrapped around Charlize’s neck.

As if this isn’t enough. It was a hand that contained a clear desire.