Charlize lifted her dress with both hands and greeted Dylan.

“I see the sun of the Empire.”

“How was your business trip?”

Dylan was kind. His voice that tickles like a bird’s feather is sweet.

<We should get going now.>

The fairies whispered to Charlize.

Charlize placed her gaze on the flower for a moment.

The fairies who visited Charlize waved their hands and greeted her.

Only the blood of the fairy could see and hear the fairy.

Dylan followed Charlize’s gaze and saw nothing but a red rose.

Charlize would often greet the fairy who appeared in the buds.

Whenever she appears, it’s because she greeted them gently. The fairies liked Charlize.

“The business trip was quite enjoyable and fun.”

Charlize looked up at Dylan and replied. The fairy soon fell down.

All the traitors were wiped out. With a total of two days. This was Charlize’s ability.

“I heard a report from Shadow. Master’s performance was remarkable. As expected from my Master.”

“You always trust me deeply, so I just want to repay you, Your Majesty.”

Dylan took Charlize’s hand and looked down. He seemed to check to see if she was hurt. Just a natural touch.

He has always done this much to think it’s weird. Her palms were smooth without a wound. Dylan raises his gaze. Said Charlize.

“I was with the young duke, and he supported me well, so I was able to swing the sword without worrying. I realized that this is what it means to have good chemistry.”

Charlize stayed overnight at Kahu’s mansion. It was because she was wondering that Dylan might show some reaction.

But Dylan had the same face. He also listened as usual.

Charlize decided to take a deeper look at Dylan.

“Yes. Of course, I faced the sword with His Majesty. But that was a spar. Didn’t you ever have a sword with the enemy in front of you?”

“I had a chance on the day of the rebellion, but…”

The extent to which the knight walks hand in hand with the lady. This is not the level to be a problem.

Charlize glanced down at her hand held by Dylan.

“I’m also glad that Master had a refreshing experience. I’m going to hold a ball for Master soon, just to celebrate and thank you for having wiped out the traitors.”

The imperial moonlight garden was very wide and beautiful. If it’s a ball to celebrate the wipeout. Charlize and Kahu would be the main characters. Dylan’s voice was peaceful.

‘Is it really okay?’

That can’t be true.

“Weren’t you uncomfortable in the mansion of the young duke?”

“…Yes, it was great. I was very happy to receive the hospitality. Especially the maids… They treated me very kindly. The clothes were prepared like this, and the delicious dinner was satisfying.”

Dylan was plain and gentle. Like a well-tamed beast, the beast’s instincts were hidden and gentle.

Charlize stopped slowly and looked up at Dylan.

“And how have you been, Your Majesty?”

“I’ve been doing well as usual. As long as Master is concerned, I will always be.”

Yeah, this kind of answer, too. She has always heard of it.

Charlize involuntarily bit her lip. She thought it wasn’t true, but she tried to reassure herself. She didn’t intend to be fooled. It’s just.

She couldn’t know. Dylan’s eyes seemed to touch her skin as a sword blade. His voice sinks in the breathtaking atmosphere.

At least she doesn’t hate him.

She said this to test Dylan.

Dylan’s hands are full of strength when holding on to Charlize. However, it was such a short moment that it was ambiguous to be sure.

Dylan blinks his eyes and breathes. Charlize inhaled the breath he breathed again.

It was definitely a cool autumn night, and somehow it felt like hot summer air.

The respect for the teacher is overflowing.

Meanwhile, after finishing his business trip, Kahu immediately returned to the training camp of the Imperial Knights.

The training was over because it was late at night.

As he was about to enter the office to do paperwork, he saw Akan walking from the end of the hallway.

It was Akan who spoke to him first.

The two were equal in status.

However, Akan is 7 years older than Kahu, so he’s speaking informally. Kahu was on the side that uses honorifics.

“No, should I call you the leader now?”

Akan grew up to be a strong candidate for the head of the Imperial Branch since he was young.

After Dylan ascended the throne, in recognition of his contribution, Akan was awarded to the 2nd Knights Commander.

The 1st Knight Commander, who was Akan’s dream, returned to Kahu’s seat.

However, there was no complaint about this fact.

Because the runner-up of the swordsmanship competition five years ago was Kahu.

Before the return, the winner was Akan, but he was forever an unknown truth.

Meanwhile, Kahu recalled Charlize as he looked at Akan.

They resemble a little. No matter who sees them, they have a classic atmosphere like that of a high-ranking noble.

Although they looked different.

A clear black eye. Akan, who recently had a son, also felt the maturity of becoming a father.

“Congratulations on having a child.”

Akan, who would have had to pass by, hesitated for a moment. It was very subtle, but Kahu, who was a good reader of human energy, paused somewhat curiously.

“Charlize… How is she doing?”

The reason why he asked that. The rumors of the application for expulsion were more widespread in the high-ranking nobility than expected. Kahu answered.

Kahu remembered Charlize. When he was in Ronan before the return, he had seen her from a distance. She was a person with a lack of affection than he thought. Rather, she seemed happy now.

Instead of asking how she’s doing, he might want to have a conversation about her with a single strand of hope. Kahu just pretended not to know.

“I heard that you have dealt with all the monsters released by the underworld?”

“Yes, the grandmaster defeated them. I just helped her.”

Kahu recalled Charlize, standing alone in the midst of the fallen Golems.

“They were very dangerous monsters. If the grandmaster wasn’t there, I would have been seriously injured. Even if I look back now, I’m not sure I can handle it alone. But the grandmaster defeated it all.”

His voice was full of sincerity. Suddenly, the former Charlize and the present Charlize overlapped. Kahu said casually.

“She has a great talent for swords. It’s a pity that she’s barely known.”

Akan’s face was filled with subtle emotions. Kahu read a lot of things at that moment alone.

Of course, she was left unattended, but she’s still a princess. Thinking that she would have had basic education, Kahu said to relieve the mood.

“I am curious about who is the teacher who raised such a great person.”

Akan’s face was filled with guilt. If he could, he would tear his hands or eyes apart.

“There’s no teacher. We never gave her. I’ve never even taught her. It’s just…”

He was just saying that she’s a genius.

He thought Charlize lived like a princess. Even though her family persecuted her, Ronan was rich.

Naturally, he thought she was educated and had such excellent knowledge and swordsmanship.

Perhaps they didn’t even teach Charlize basic swordsmanship, and it suddenly occurred to him that they didn’t teach her anything.

“Have you ever educated the grandmaster like other nobles’ children?”

Kahu knew after seeing his reaction.

Of course, Charlize must have learned basic etiquette. Because rumors have circulated in society.

But other than that, there has never been a rumor.

‘The grandmaster is just great by herself.’

Neither swordsmanship, nor its knowledge, nor judgment nor common sense, was made by Ronan.

Isn’t she the one who became the teacher of the prince at the age of fifteen?

Akan had a horrible and terrible face.

“I have nothing to say.”

He looked like he was going to collapse with regret. Kahu thought it was his own doing.

In the end, Kahu bowed to the hardened Akan.

Akan did not catch Kahu.

Kahu soon arrived at the office.

‘Where on earth did you learn it?’

Even if you’re born naturally with the sword. Knowledge is not something that can be easily contained. Especially, information about the Golem monster is unknown to the imperial family.

It changed after the return. What on earth is Charlize.

The voice she used to call softly comes to mind. Unknowingly, Kahu realized that he was only thinking of Charlize.

Kahu sat on a table full of papers.

Work was the best when he had mixed thoughts.

However, Kahu’s hand while holding the pen paused and hardened.

It was about Charlize the other day.

Among the fallen golems. Charlize, who stood tall and shining alone. When he looked at her, he clearly felt that she had changed.

By the way. Just as Charlize changed, Dylan was different from before. A question came to his mind that he had never thought about before.

‘The current empire is far from the empire of God ruled by the wise king.’

It is clearly different from before the return.

And since the change, too much blood has shed in this country.

His Majesty Dylan. There’s nothing he can’t do if he decides. A man who could put the world under his feet.

Such a man obeys Charlize.

What kind of empire are you trying to create after all?

Strangely, the end seemed to be a ruin.

The ink spreads and the white paper becomes dirty.

Kahu looked down at the blackened paper. 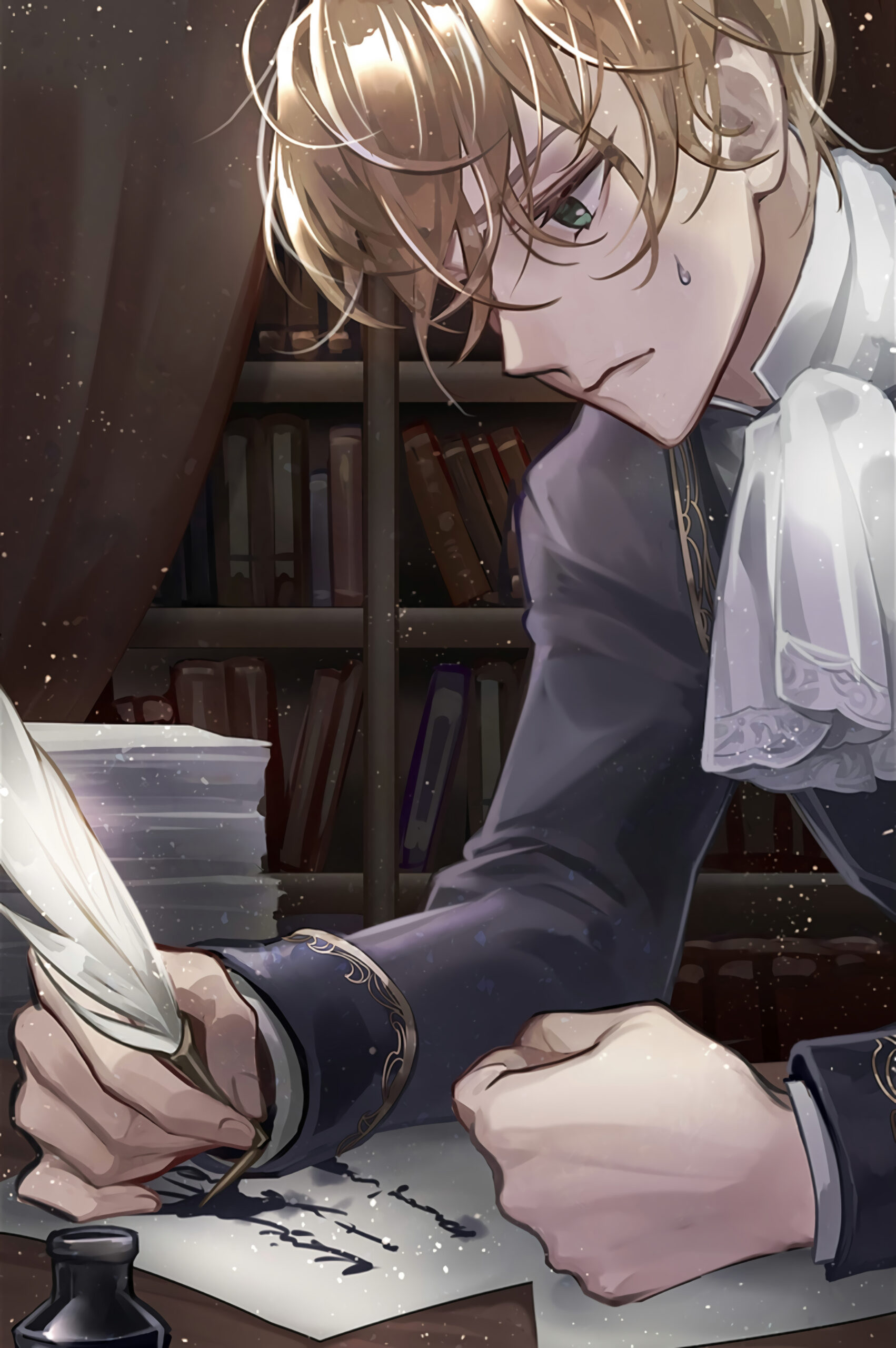 I Became a Father